Checking my email yesterday I was greeted by a cryptic message with the subject line, “2010 Restaurant Rankings” and a link to a Blogspot domain. I’m used to unsolicited email and this was clearly sent to food bloggers and writers who publicize their contact information as I do. Some of you may have received the same message.

The post appears on a blog called “Kansas City Gazette,” which perhaps seeks to be an online news outlet. The restaurant post itself just is a long list of local establishments and their “star” ratings compiled by someone who refers to himself as “KC Food Critic.” According to this list we have no 5 star restaurants and one 4-star restaurant. That’s fine; Michelin and other rating systems are very prestigious and rarely give out the highest ratings. This guy makes things clear at the top of the post:

“It is difficult to make star list, so even a 1-star ranking is prestigious.”

Ah, okay. So who is this anonymous restaurant critic who deigns to assert himself as the king of the local culinary world?

“KC Food Critic has a graduate degree from a top tier school and has lived and worked in Europe for numerous years.”

Jesus, I’ve seen more convincing credentials in spam emails for penis enlargement pills. After perusing the list for a short while, I determined that KC Food Critic has no idea what he is talking about. Go ahead, take a look at the post. 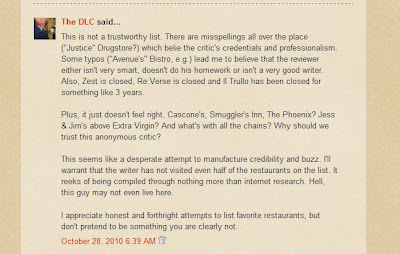 Why does this make me sort of upset? Some of us around the blogosphere like Meesha, Bull E. Vard, Chimpotle, KC Napkins guy, Robert Bishop, Aaron Deacon and many others are forthright about our biases, (lack of) qualifications and subjectivity in our food writing. We never claimed to be fancy food critics. But, we have all done the hard work, through many years of eating, writing, and publicizing to develop a little audience of readers who trust what we have to say. We have earned a little bit of credibility and it feels good.

What has this KC Food Critic done? If he came out and said “these are my favorite restaurants,” that would be great. Less informed people than him do that all the time. What irks me is the assertion of authority where clearly none is present. What irks me is the fake Michelin exclusivity. I am taking a hard line on this because I’m frankly sick of everyone trying to be food critics. I am not a food critic. It’s very hard work to be an authority. People like Charles Ferruzza and Jill Wendholt Silva may not be perfect but they get the job done, with occasional moments of brilliance. I want KC Food Critic to go away. I want everyone who wants to be an authority on restaurants without doing the work to go away. Make it stop. This so-called Kansas City Gazette has just this one post so far. Let’s hope it stays that way.